After a late night watching the Super Bowl in the Main Stage, complete with snacks appropriate to New England and L. A., the clocks moved forward two hours, making it even harder to get up for this morning’s tours; they were worth it. Arica is located in the Atacama Desert, which runs along the coast in southern Peru and northern Chile. As you can see from the background of the first photos, the landscape is brown and barren. A local university professor, named Juan Diaz Fleming conceived of a public art installation to make the desert more interesting. I love the name; translated into English, it is the Garden of Presence.

The first photo shows me standing next to one of the concrete sculptures Fleming created. This one represents Pacha Mama, the Chilean name for a goddess who is like earth mother. It is supposed to be a uterus with Fallopian tubes at the top. The orthopedic surgeon in our group thought as an OB/GYN I should be photographed with her! The next photo is a sundial. The last two represent a man and a woman. Chilean dancers in native festival costumes are seen with the sculpture representing man. 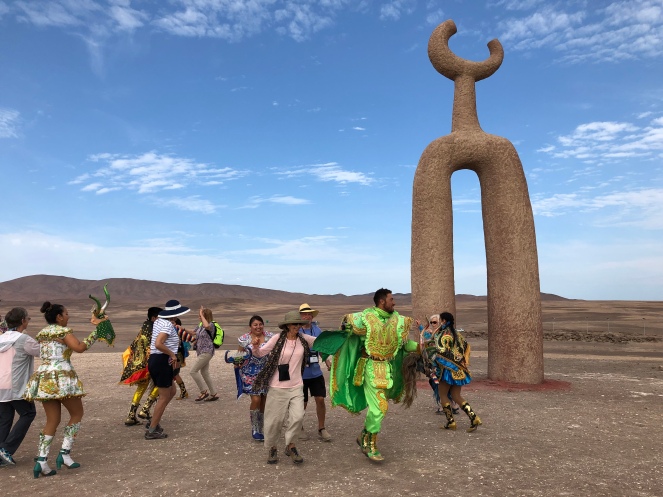 A few years ago as the water company dug a sewer line, they discovered mummies. An archeological site was declared. Multiple bodies and artifacts have been found and are exhibited in the museum we visited next. Carbon dating showed these bodies to be over 7000 years old. The Chinchorro and their culture from 5000 B.C. are well represented. This makes me question the theories about people from North and South America coming over a land bridge in Alaska!