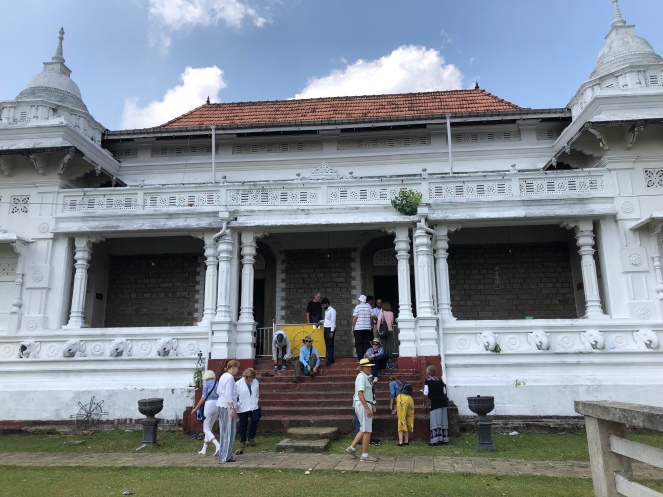 Thousands of tuk-tuks, a three wheeled vehicle that carries two visitors (the legal limit) or whole families, travel the city streets and village lanes of Sri Lanka. As part of our experience, we rode about ten miles in a tuk-tuk to the base farm of Sri Lanka’s master farmer. There we saw tea fields, banana patches, coconut trees, cinnamon trees, pineapple patches, rubber trees, mango trees, star fruit trees, and many more plants I can’t even remember.

As I stood beside this tea field, I watch a man climb a coconut tree and tap the flower for milk. He lowered the gourd on a rope; they poured the milk in a pitcher, and we all drank some from coconut shell cups. Later, we learned that cinnamon trees live for a hundred years and we watched as the same farm worker showed us how cinnamon bark is prepared. It has to be done by hand and is a labor intensive process, no wonder cinnamon is expensive. We saw the process for tapping rubber trees and how the raw rubber is made into sheet so it can be saved at least a year to get the best price. Raw rubber has to be sold immediately at whatever price. We saw countless uses for different parts of the coconut, including the making of coconut oil. Finally, we ate a fabulous lunch, prepared by the farmer’s mother from products mostly grown on that farm. I can’t begin to tell you all we learned about products we use every day. It takes the rubber tapped from a tree for two years to make one tire.

Almost seventy percent of the Sri Lankan population are Buddhist; seven percent each are Hindu and Muslim, and six percent are Christian. We visited the Buddhist temple shown in the photograph. Inside we saw a large Buddha, reclining with an altar where we could leave flowers. We had to cover shoulders and ankles and take off our shoes. This temple is six or seven hundred years old. Back at the part most of us bought saris for the next gala. Now I have to learn how to drape it and what to wear underneath. Also, I want Jane Anderson to know that I bought her some tea. While it was very hot, I think our time in Sri Lanka, formerly Ceylon, was one of our best days.