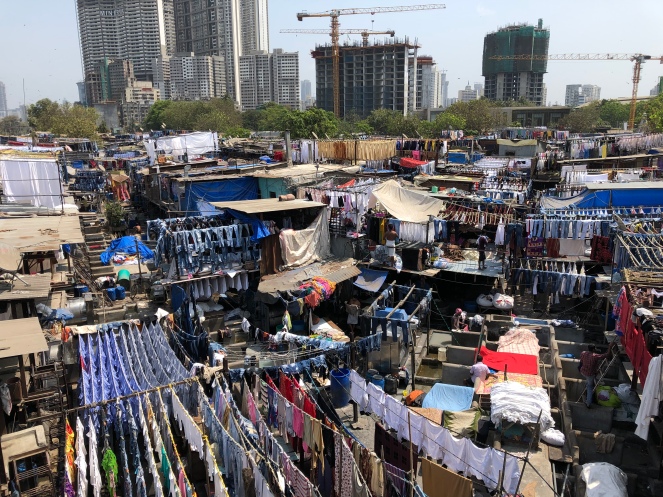 Bombay or Mumbai as they call it in Hindi is a seven island city of sixteen million inhabitants. Across a bridge the mainland city, called New Bombay, has four million more. It is India’s largest port, its commercial and industrial center, its fashion center, and the heart of Bollywood, India’s movie industry. It has a bit of all of India’s diverse cultures.

The first photo shows the Gateway of India, Bombay’s most famous monument. It was built as a triumphal arch to commemorate the visit of King George V and Queen Mary in 1911, but it was also the site from which the last British ship sailed when India achieved independence in 1947. As we drove about the city, we passed dozens of beautiful, stone, colonial buildings like those at the University of Bombay as well as modern sky scrapers like the luxurious Taj Mahal Hotel. To show the diversity though Sandy and I passed on the opportunity to see it, Dharavi is a slum area where three-hundred thousand to a million people live and work at cottage industries and recycling which bring in equivalent to five-hundred million dollars.

As a demonstration of the contrasts in this city, the last photo shows Dhoby Ghat, the largest traditional laundry in India in the foreground with modern skyscrapers behind. A ghat is a traditional laundry where clothes are steamed in water, beaten on flogging stones to remove dirt, placed in big vats of starch, hung out to dry, and then ironed. I suspect the Cafe Royal, where we enjoyed a buffet lunch of Indian dishes, uses this laundry for its napkins. They were starched so stiff they laid on your lap like a piece of cardboard, but there were no wrinkles. More on Bombay tomorrow.