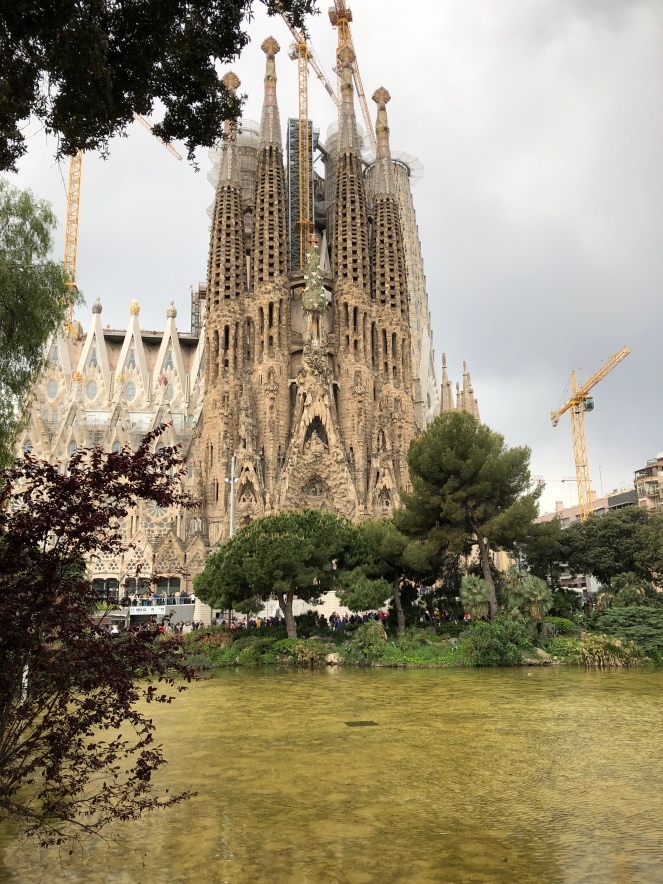 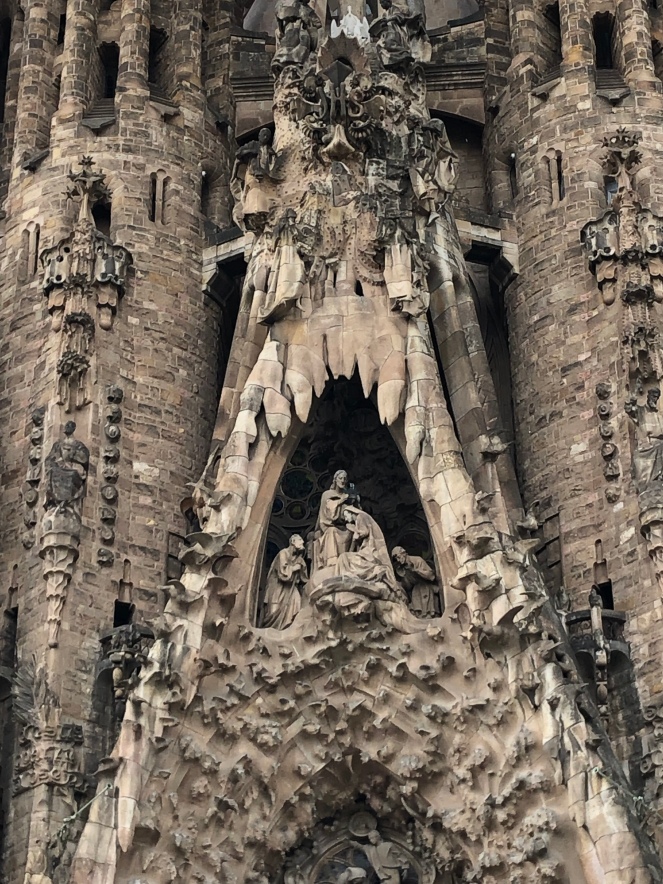 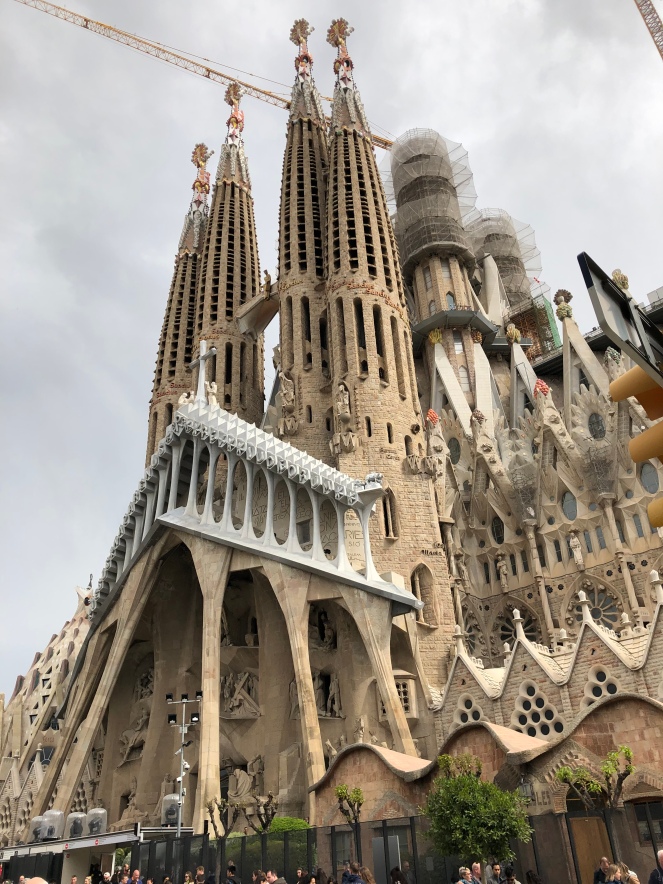 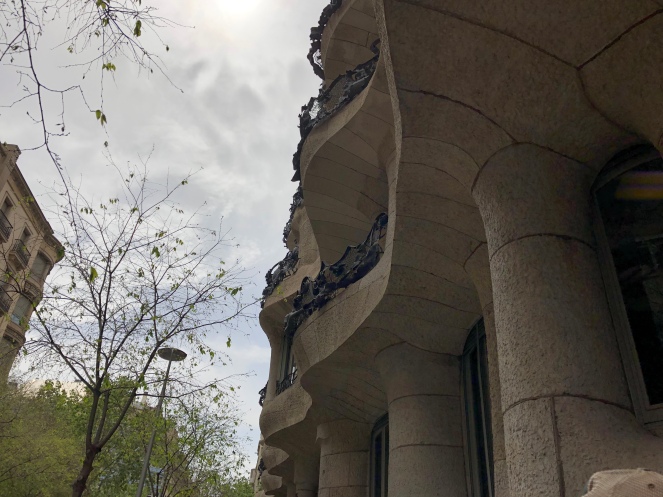 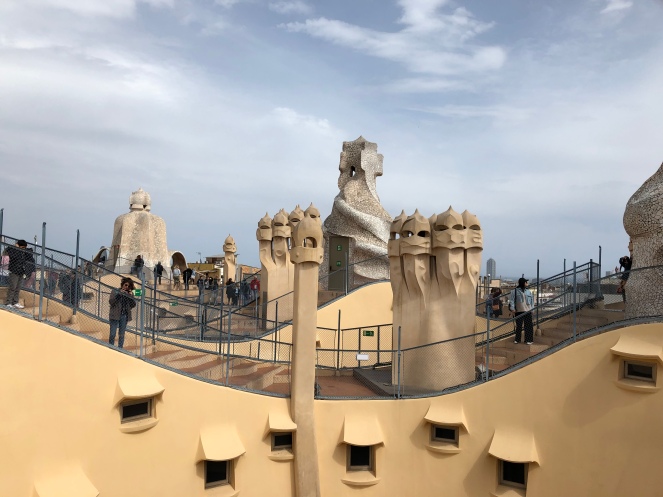 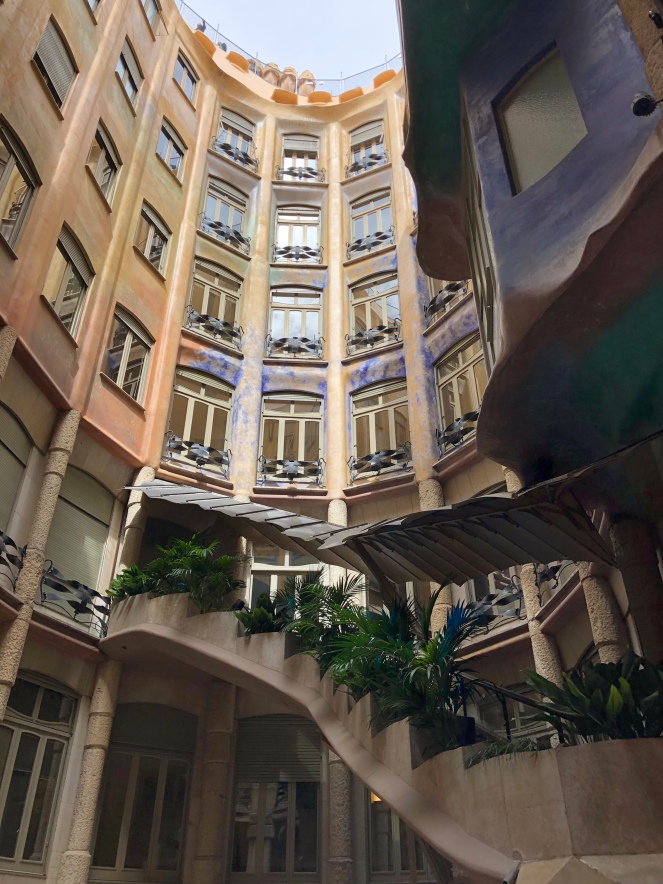 The first photo shows the famous Sagrada Familia, the basilica designed by Antoni Gaudi in honor of the Holy Family and the most visited site in Spain. Even with cranes in place for restoration, the view was stunning and photos fail to capture the awesome beauty. Every feature was chosen with a special meaning. Studying the detail of the exterior walls was like reading a Bible. The third photo shows the tower dedicated to the Easter story. With today being Maundy Thursday, the basilica was not open to the public.

We did get to visit the interior of a house that Gaudi designed for Pere Mila, La Pedrera, built between 1906 and 1912. The fourth photo shows the exterior with its dramatic curves and unusual balconies. The final photo shows the interior courtyard which allows for the light from all sides in the apartments. The fifth photo shows the roof where we began our tour.The large round structure in the middle of the photo is one of six stairwells. The storm trouper-appearing structures are chimneys. Our guide said George Lucas visited this house and she thinks the storm troupers were inspired by these chimneys. Gaudi is said to have based his designs on things in nature, believing that God was the best designer. The interior of the house was filled with arches and windows that provided wonderful, natural light, unusual for the time. La Pedrera was declared a UNESCO World Heritage Site in 1984.

Barcelona is a beautiful city, even without the Gaudi structures. It dates from the first century BC. We saw remains of a Roman Wall at the back of the Bishop’s house, which was built in the 1200’s when the Cathedral was started. We also saw the venues built for the 1992 Olympics and still in use today. Our guide explained that the port can have cruise ships because it was enlarged to have cruise ships serve as hotel space during the Olympics. Apparently, Barcelona planned carefully for the Olympics. I am glad they did; it meant that Barcelona could be a stop on our Grand Voyage. I think this is a place that needs to be revisited.

One thought on “Barcelona, Spain”