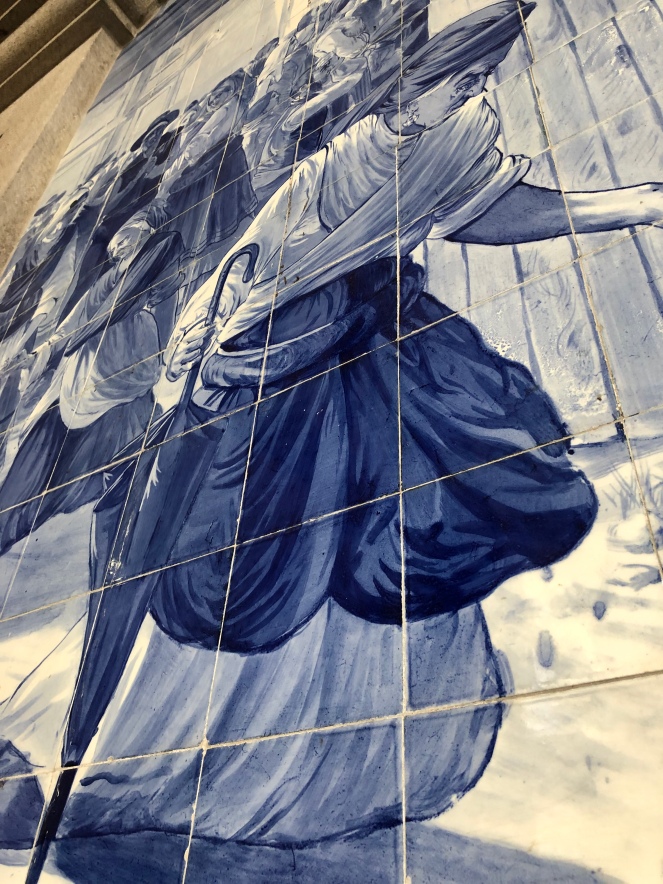 Reports claim that Porto, Portugal is one of Europe’s most beautiful cities. Located on the Douro River just before it opens into the Atlantic Ocean, the earliest settlement here is believed to date back to 500 BC. The Romans built walls that still mark the old town which is a UNESCO World Heritage Site. The central square, shown in the first photo, is still the site where the people get together for celebrations and parades. The city is built on two hills and this square is between them. The second and third photos show the hills to the east and west of the central square.

One particularly beautiful building is the Train Station, shown in the fourth photo. The walls are covered with scenes done in blue and white tiles. The fifth photo shows the details of one of the scenes. Our guide explained that the squares were painted and numbered so the final picture would be made. Around the top in other colors, the scenes depict the history of transportation. As always the photos fail to show how incredibly beautiful this was.

Porto is said to be the site of the origin of port wine. Our last stop today was to the Ferreira winery where white, red, and tawny port wine are made. This was on the south side of the river. The last photo shows the old town from across the river with the winery’s boat in the foreground. The grapes are grown in the Douro Valley and brought to the winery on boats like this. We learned that port is different from regular wine because the fermentation is stopped after just a few days by adding brandy. This makes port sweeter and fortified, twenty percent alcohol compared to twelve. It was fitting that we should be here on Earth Day. Throughout the city we saw garbage bins in groups of four with different colored labels so that recycling would be easy, the first time we have seen this. No doubt, this is a beautiful city and warrants further visits.