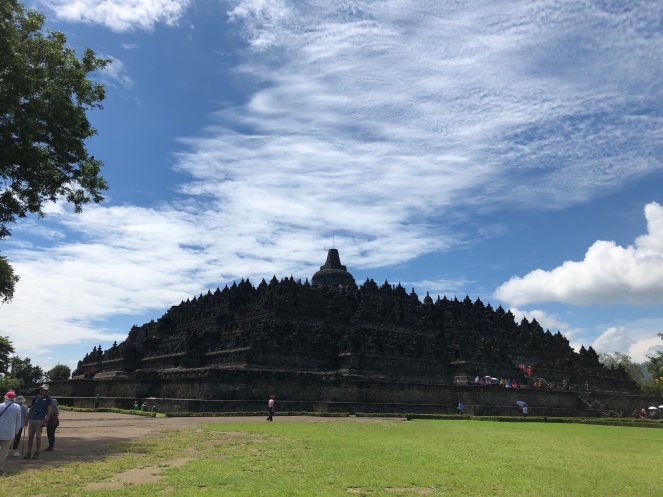 Wednesday morning at 7:00 AM we left with a police escort for a two-and-a-half hour ride to Borobudur, the largest Buddhist temple in the world, shown in the first photograph. Built in the ninth century CE, Borobudur is surrounded by active volcanoes and was covered with volcanic ash for centuries before it was restored in the late 1800s. An active volcano is faintly visible in the clouds between the tree and the south east corner of the temple in the second photo. A pyramidal structure, the temple has 10 levels each representing a step toward Nirvana, the highest level of human existence. The highest level of the temple is called the Stupa and represents Nirvana. Five hundred and four statues of Buddha adorn the outer walls.

Visitors can climb to the Stupa level, but I did not reach Nirvana. The inner walls of the second and most interesting level are covered with stone carvings which tell the story of Prince Siddhartha who became the Buddha. One of these stories in shown with our guide in the third photo.

We traveled over an interstate type highway for half of the trip to Borobudur. Along the way we saw several active volcanoes surrounded by tropical rain forest, several wet rice paddies, and a large number of mosques. Eighty-five percent of the people in Java are Muslim. The second half of the trip was over a narrow road where the police escort would stop the local traffic and the tour buses would fly down the middle of the road. Our guide said the people are not thrilled with this, but they understand the importance of tourism to their economy and they know that Borobudur, a UNESCO World Heritage Site, would be out of reach for cruise ship passengers without this process. The trip would just take too long. After visiting the temple we had a buffet lunch of typical Indonesian cuisine at a beautiful hotel in sight of the temple. It was another interesting, informative day. I am a bit behind with my posts due to internet difficulties but will try to catch up in the next three days.