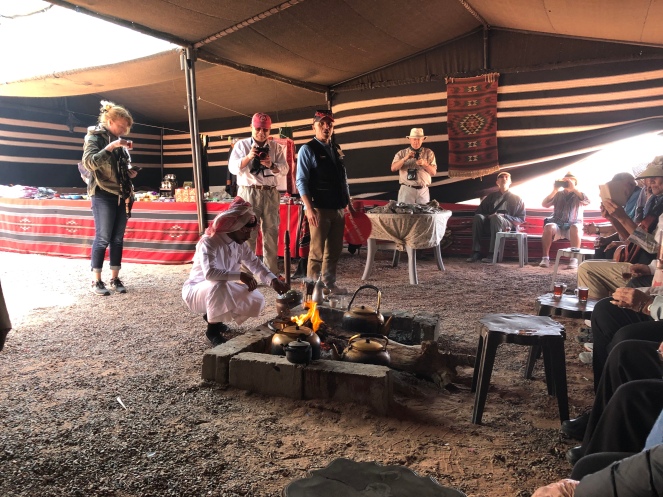 Wadi in Arabic means valley. Yesterday, we bused past the movie set for the new Matrix movie into Wadi Rum, part of the Rift Valley in Jordan. Ariz, our 4X4 Bedouin driver, lived in a nearby village and spent his summers in a tent deeper in the desert. Twenty percent of Jordan’s people are Bedouin but more in this area, according to Aziz. We started at the Seven Pillars of Wisdom Mountain, the site where Lawrence of Arabia wrote his famed memoir.

From the mountain we drove to a Bedouin tent for lunch. On the way we stopped at some 700 BC art on the rocks (the last photo). That stop also offered an optional camel ride (I didn’t) and served tea in a black-and-white-striped tent, which happened to have Bedouin goods for sale. I bought Drew a gift here. Another stop on the way was Lawrence’s Gorge. Here, an image of T. E. Lawrence was carved into stone as was an image of the first king, who served after Lawrence helped unite the Bedouin tribes.

At lunch we had a demonstration of a Bedouin oven. They dig a hole in the sand and burn wood to heat it. Then they leave just the embers, put in the food, and cover it with sand for a few hours. At the end of the demonstration, our food was dug out of the sand in a giant iron pot, lamb, chicken, and vegetables. Bowls of sides and drinks were brought in on a 4X4 truck. It was all delicious. Last night we watched Indian Jones and the Last Crusade, part of which was filmed in Petra where we go tomorrow.